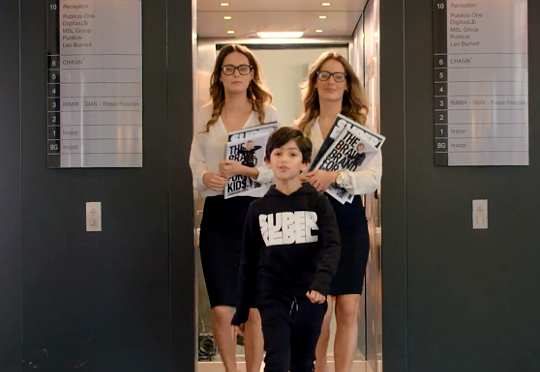 SUPERREBEL KIDSGEAR is taking its 'Be Brave' campaign viral with the launch of its CEO ad, which will showed only online. The online launch is being handled by SUPERREBEL and marks the start of the first international campaign for the young fashion brand for kids. The viral campaign features a 45 second digital video version of CEO directed by Frequin. The film show a management update by the new 7-year old italian CEO. He arrives in his heli and is picked up by his stretched limo while presenting his management vision. The film was shot in Amsterdam. Creative Director Lodewijk Varossieau said said: "SUPERREBEL KIDSGEAR is using an online creative strategy and our seeding expertise to maximise the viewing and spread of the film, as well as the surrounding buzz for the brand. The film will also be shown on Instagram, Youtube and Facebook. The film is used to generate brand awareness and to find international agents.

SUPERREBEL KIDSGEAR was officially launched AW 2015. It is a collaboration between Brand Works and SuperRebel.com. It is our mission to become an international fashion brand. That's why we created SUPERREBEL KIDSGEAR. Made for kids and loved by kids. BE BRAVE.