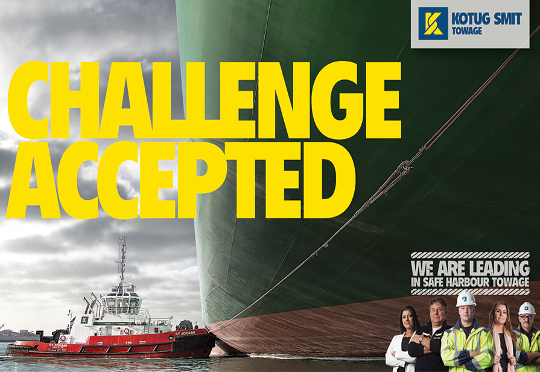 SUPERREBEL introduces the new international campaign of Kotug Smit. Lodewijk Varossieau, CEO/Creative Director SUPERREBEL: "After we developed the new logo for the combined entity we were entitled to develop the new advertising campaign. The theme is Challenge accepted. We chose the theme because Kotug Smit never says no to any challenge. Kotug Smit is a real challenger in the maritime world. With strong ambitions. The Challenge accepted-campaign will be a 360 degrees approach. The campaign will run online as well as offline in international magazines. Challenge accepted will also be the them for trade fairs and other events. Besides the we developed a whole new website in close cooperation with Forza Digital."

Lodewijk Varossieau: "We are really proud that we are the interantional design and advertising agency of Kotug Smit. This is one of the most beautiful Dutch companies in the maritime sector. The new campaign is really distinctive an will help to achieve the commercial and financial goals. When we were invited to make the first proposal we just said: Challenge accepted."