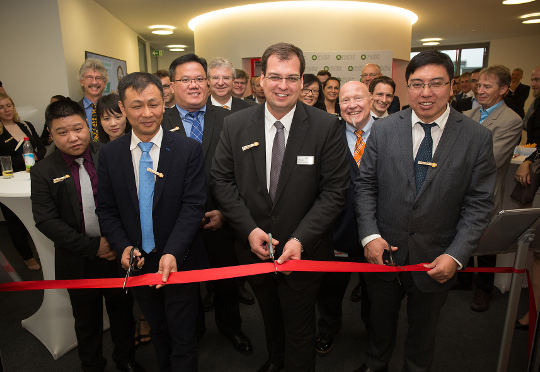 Holitech has been leading the display manufacturing industry in the Asian market for quite some time, but in Europe the stock-listed company is almost unknown. This will change as Holitech opened its European Headquarter in Munich on July 13th, focusing on developing their customer base in the European market. The company is also planning on building its own small and medium-sized production facility within the coming years.

Holitech Technology Corporation was founded in 2004 and now employs around 24,000 people in China alone. With an annual turnover of EUR 2.56 billion (target 2017) and a current stock market value of EUR 3.5 billion (as at 20 July 2017), the group is the world's largest listed display manufacturer.

Philipp Kirschenhofer, Managing Director of Holitech Europe GmbH: "Holitech has the entire value-added chain under one roof, this is the company's unique positioning feature. In Asia, the display manufacturer operates around 30 production facilities. This makes us independent of component suppliers and we can be flexible in responding to individual customer requirements. In addition, we are also able to offer interesting price structures through our complete in-house production."

With the opening of the new European office in Munich, Holitech is now looking to bring these competencies to the European market.

Focus on the IoT and automotive industry

The product portfolio ranges from active and passive TFT-LCDs and OLEDs to bi-stable e-paper displays. The latter are particularly interesting for applications in the areas of Internet of Things and Smart Home. Together with a German telecommunications and network company, Holitech plans to launch a thermostat application in autumn. The e-paper products used for this purpose can be produced at a low cost and are preferred for use in battery-saving applications. Another important target group are the major automotive suppliers, which have special requirements for camera and biometry modules as well as for custom display products and touch panels.

Brand positioning and establishment of an in-house production

For the next years, Holitech Europe has set ambitious goals.

Kirschenhofer: "Even if Holitech is already very successful in Asia, we have to establish our brand here on the European market and to position Holitech as a reliable and innovative partner. We are going to expand our customer and distribution network in the coming months, and we plan to produce prototypes, small and medium-sized units over the next few years. In the automotive industry alone, Holitech Europe is aiming at sales of approximately 380 million US dollars for 2022."