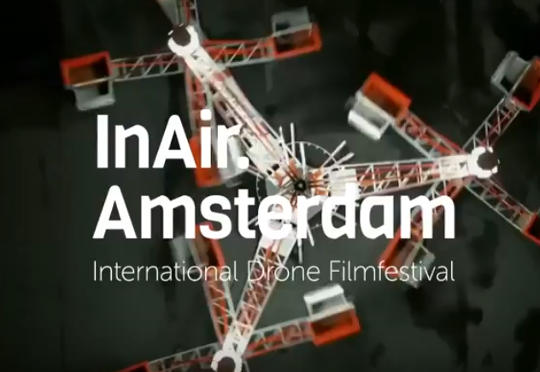 Film Festival InAir.Amsterdam all about drones

InAir.Amsterdam is an innovative Film Festival, with a drone film competition and a program of speakers and experiences.

The audience gets the chance to see the latest innovations in film and a futuristic display of drone applications.

The use of drones in film makes a rapid advance in cinematography. The mini masterclasses will cover topics for drone starters to tips and insights for the professional droneflyers. We will cover questions like:

Where are you allowed to fly a drone in the Netherlands and abroad? to: What are the implications of new filming techniques, e.g. combining drones and 360 or VR, for the narrative?

These talks are about drones that contribute in a positive way to solutions to social problems. What can they do and what can we expect in the near future? You will literally see the drones fly and hear stories about drones that exceed your imagination.

During InAir.Amsterdam they will try to make a match between media professionals. Interested people can indicate in advance that they want to be linked to another professional. Script writers, directors, drone pilots and artists can meet each other in this way.

Peter van Haastrecht started as a photographer with photographs of birds and nature. But about a year ago he started taking pictures from the air. Beautiful drone pictures of Dutch landscapes are the result.

Van Haastrecht: “Photography is like therapy for me, just relax and get away from it all. I shoot my photos in the early morning, with nobody else around, just the whistling of the birds and nothing else.”

InAir.Amsterdam is an initiative of AVROTROS.